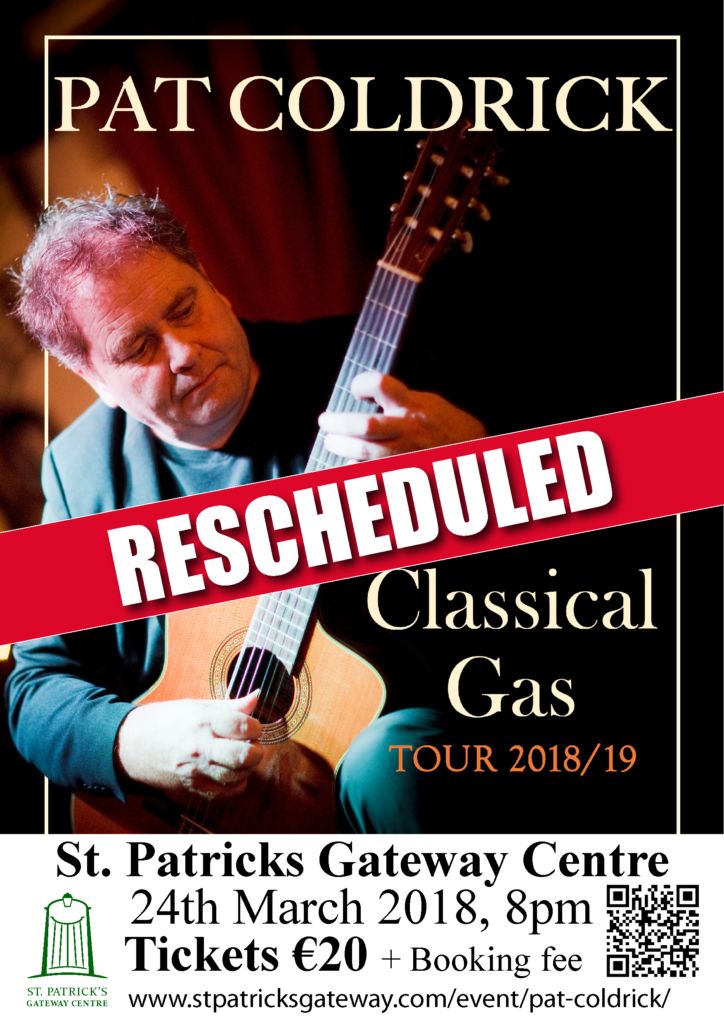 Pat Coldrick is an Irish Classical Guitarist and Composer, who has been working for the last six years in Ireland but has also performed Recitals in Europe, the USA and Russia.

Pat has been described as ‘pushing the boundaries of classical guitar’ with his musical interpretations and compositions and has made Classical Guitar exciting, interesting and more accessible to music lovers in general. Through his interpretation of music and by exploring and embracing new technologies he strives to enhance the dynamics of the classical guitar and bring his music to a wider audience both at home and abroad.

His music defies genre and appeals to a wide cross section of music lovers. While Pat plays his own arrangements of great classical pieces, it is his own compositions that sets him apart – pieces such as Lament, CityJam and Antarctica to name but a few. Pat’s skillful and atmospheric connection with his audience is an art form in itself and is in total contrast to other more formal classical performances. He has a very easy going, laid back and unassuming approach and his interaction with the audience and philosophy of ‘entertaining’ rather than ‘educating’ his listeners is a breath of fresh air.

Once Pat begins to play people are immediately captivated by his dedication, passion and skill. His interpretation and delivery of each piece combined with his superb artistry as a performer results in his unique ability to make his audience laugh and equally move them to tears.

To date Pat has produced 2 albums – Cayendo in 2010 and CityJam was release in November 2014. Since CityJam was launched his music has been played on all the major radio stations in Ireland and was voted ‘Album of the Week’ on RTE Lyric FM. It’s fair to say that Pat’s music is currently attracting a lot of attention in classical quarters and beyond. Pat is now widely acknowledged as a very accomplished musician and composer who is succeeding in bringing classical guitar music ‘Centre Stage’ where he so passionately believes it belongs.

Pat’s musical formation has not followed normal traditional lines. He is mainly self taught and in a relatively short period of time he has put together an impressive body of work and has gained considerable recognition throughout Ireland and Internationally both as a performer and composer. Some highlights of his achievements to date include:

Sell Out Concerts: 2 Sellout Concerts in The National Concert Hall· Performed with Degani Ensemble under the leadership of Alan Smale (RTE Symphony Orchestra)· Invited to Play with the RTE Concert Orchestra in Temple Bar in November 2014 for Dublin Culture Night