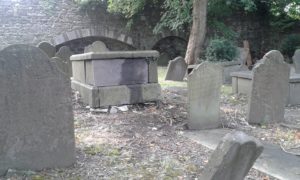 The Graveyard surrounding the church is the oldest intact Graveyard in Waterford City and has approximately 40,000 people buried within. Of those we have burial records for over 3000 people from roughly 1723 to 1855 and have over 250 headstones. With a large number of people, it is not surprising that there would be some famous people buried within. This guide goes through some of those people. We hope you enjoy the richness of this small but important Graveyard.

The St. Leger family was an important family in Munster with Estates around the Province. Buried in the Box Tomb here we have Catherine who died 15th June 1739, the wife of the Merchant George St. Leger along with seven of her babies and her teenage Daughter Mary who died 30th March 1754. Also buried is Revered Father John St. Leger, who died 1st June 1783, he was a Pastor of St. Patrick’s Parish.

Nicholas Devereux died 23rd October 1798 aged 61. He lived in Ringville, Co Kilkenny and was killed defending his home from a gang of burglars. He willed his possessions to his niece Letitia Hill Devereux aka Lady Esmonde who would later will her money to Ringville School. 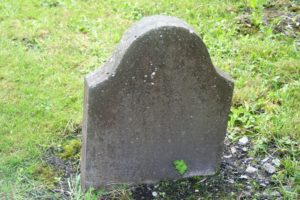 Lieutenant David Allen died 30th July 1826 aged 43. He served in the British and served on the Lyra during the Napoleonic Wars. During the Napoleonic Wars he was involved in the Defence of Castro Urdiales and the Reduction of San Sebastien.  Buried with David are his wife Anne who died 18th April 1831 aged 45 and his four children, Mary Frances who died 6th May 1822, Francis who died 6th March 1825, Mary Patience who died18th April 1829 and Eliza who died 7th June 1829 aged 10.

Zachariah Taylor died 17th September 1782 aged 31. Zachariah worked as a Gaoler/ Prison Guard who worked in the City and County Gaol, where the present-day Garda Station is now situated.  He is buried with his beloved daughter Ann who died in 1780 aged 6.

Frederica Blood died 26th July 1838 aged 31. She was the daughter of Chaplain-General to the Forces; Reverend John Gamble. In 1828, she married John Alyward Blood who was a Major of the 68th Light Infantry. She had four children two who followed in their father’s footsteps. Frederica committed suicide 26th July 1838 by hanging herself from a bedstead.

Doctor James Sempill died 10th June 1806. He served in the Waterford Independents 2nd Regiment during 1798. Dr. Sempill was Alderman of Limerick and Waterford and a former Mayor of Waterford City. He also worked in the Leper Hospital. He is buried alongside his wife Anna and granddaughter Nicholina. His Ledger was erected by his daughter Elizabeth Anderson nee Sempill who was married to John Anderson, the founder of Fermoy in County Cork.

Revered William Moore died 6th December 1773 aged 58. He served as Minister of St. Patrick’s Parish for over 20 years and came from an important family, his father; John Moore was Alderman of the City and his uncle was Doctor Nathaniel Foy, Bishop of Waterford and Lismore who is buried in Christ Church Cathedral, Waterford.

Lieutenant John Burchall died 17th April 1822 aged 76. He was the son-in-law of Revered William Moore, having married Moore’s daughter Isabella.  John served in the 48th (Northamptonshire) Regiment of Foot and was a veteran of the Seven Years War from 1756 to 1763. During the War, he took part in the reduction of Martinique and the conquest of Havana. He had two children with Isabella, William and Elizabeth, named after Isabella’s parents. When he died he was buried with his wife who had died in 1779 aged 29.William died 22nd May 1811 aged 33 and Elizabeth died 1st March 1837 aged 54. Both children were buried with their parents.

Robert Fleming died 30th May 1777 aged 39. Robert was a part of a successful family of gold and silversmiths including his wife Anastasia and his father Ignatius and his son Ignatius. Some of the Fleming’s work can be seen in the Bishop Palace Waterford Treasures Museum. Buried along with Robert, include his father Ignatius I, his mother Rose along with his sisters Anty and Elizabeth.

Sergeant Edmund Elsgood died 8th November 1835 aged 68. He served in the 11th Regiment of Infantry; 2nd Battalion during the Napoleonic Wars. He was stationed in Gibraltar and Ceuta in Morocco. He had one unknown daughter who erected his headstone.

John Loughrey from Attyenly, Co. Galway died 18th November 1848 aged 26 and Patrick Sullivan from Laurenstown, Co. Galway who died 12th August 1848 aged 28 were both Constables of Reserve Constabulary who worked in the City. They were both killed by Fever and their colleagues paid for and erected a monument in their memory.

John Flinn died 6th June 1798 aged 42. John served as High Constable of Waterford in 1797.  A High Constable of a City was a high ranking police officer who could appoint his own sub-constables and in some cases also collect taxes.

While Henry Denny, the man who founder Denny’s Rashers and Sausages is buried across the river in Ferrybank, a lot of his family is buried here. Among the Denny’s buried here include: his grandfather, Richard; his father, John Hall and his Stepmother Rosannia who died 15th March 1780 aged 32.

Richard Penrose died 14th March1801. His parents were Richard and Mary Penrose from Brittass, County Wicklow. He was a Merchant who died from gangrene after falling off his horse. He was the 3rd Cousin of George and William Penrose who founded Waterford Crystal.

Henrietta Burchall died 28th October 1829. Henrietta was the daughter of Colonel William Alcock, High Sheriff of Co. Wexford and Mary Loftus of Loftus Hall, Wexford.  She was the sister of Henry Alcock; Mayor and MP of Waterford. In 1785, she married John Burchall. John died in 1822 and when Henrietta died she willed her money and property to the Creation of the Burchall Asylum on Parnell Street.

Captain Brabazon Christian died 8th September 1788 aged 33. He served in the Royal Navy during the American War of Independence first as a lieutenant in July 1776 before becoming a Commander in 1777 and got his own ship the Vigilant. He took part in the defence of New York, The Egg Harbour Expedition and the defence of Savannah. He was made a Captain in 1780 and married Elizabeth Greene in 1784. He had one daughter called Olympia who was born in 1788.

Jonathan Dillon died 20th September 1846 aged 67. He was a watchmaker from George’s Street in Waterford City. He came from a family of watchmakers and jewellers. His son John Dillon immigrated to America and later inscribed a hidden message in Abraham Lincoln’s Pocket Watch which was discovered in 2009.His sons Thomas and Richard made Queen Victoria’s Claddagh Ring in 1849, Thomas moved to Galway in 1850 while Richard remained in Waterford.

Compiled by: Leonard Kearon MSc
In association with TÚS