History of the Church 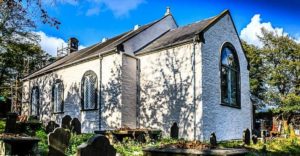 The current church dates to the early 18th century. There was an earlier twin aisle medieval church on the site as seen on older maps of the city. Indeed, there is some evidence based on the name of the church and archaeological discoveries that an ecclesiastical settlement may have existed on the site since early medieval or pre-Viking times.

St. Patrick’s was situated just inside the old city walls which form the western boundary of the site. The St. Patrick’s Gate entrance to the city, from which we get our name, was situated near the south-western side of the graveyard. Also attached to this part of the site were the former City and County Gaol, and a medieval citadel St. Patrick’s Fort. The ruins of these were demolished in the 1960’s to make way for the present Garda Station.

During the Reformation the church was damaged and changed ownership between the Catholic and Reform parties. It became the home of the Presbyterian congregation in 1964. Today it houses an ecumenical and multi-national congregation under Methodist care as well as the new gateway centre St. Patrick’s Gateway Centre is open all year round to community groups, local organisations and individuals.

A church has been on this site since at least 1050 A.D, serving the parish of Irishtown of Waterford, present day Ballybricken. In pre- 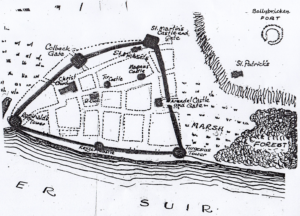 Not much is known about the appearance of the medieval church as only a small number of fragments remain, some of which have been integrated into the building of the current church. The first recorded mention of the church was in 1468, along with a well dedicated to St. Patrick near the church.

The church was destroyed in 1603 when Soldiers from the citadel attacked the church burning most of the wood. The attack seems to be in retaliation for Dr. James White’s attempt to reclaim the building for the Catholic Church following the death of Queen Elizabeth I.

The church remained as a ruin until 1615 when The Mayor of Waterford wrote in a report to King James I about the condition of the churches in the City and the church was rebuilt in 1616. The new church was a twin-aisled building as depicted on Nicholas Pynnar’s 1624 map of Waterford. 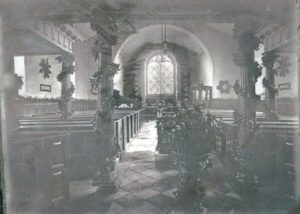 The church was rebuilt from roughly 1721 to 1727 on the orders of Bishop Thomas Milles and resembled the building we have today. During this time the church’s baptismal font and bell were installed in 1723 and 1725 respectively.  In 1742 the vault under the porch was sold for burials. In 1756 John Roberts, architect of Waterford’s two cathedrals was commissioned to do work on the Church. The 19th Century saw the church being modernised with the installation of gas lighting in 1886. In 1892 the church was electrified; however this was later dropped due to the high cost at the time. The church was re roofed in 1916 for £384 or approx. €35,500. 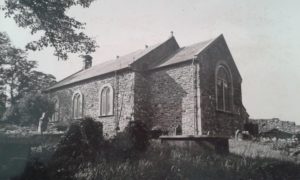 Following a boiler explosion in their Lady Lane Church, the Presbyterians were allowed to use the church by the Church of Ireland in 1961. Two years later the Presbyterians bought the church for one penny. In 2010, plans were announced to turn the church into a community centre with work finishing in 2014. The Gateway Centre was officially opened by President Michael D. Higgins in 2015. The centre has hosted concerts, a variety of lectures, workshops, charity work and events for local International communities. 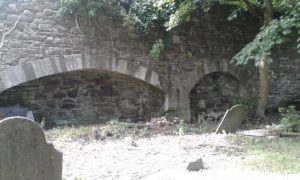 The west wall facing the Garda Station is part of the City’s Norman Walls. The wall contains two bricked up archways currently the largest is 4 feet tall. However it has been documented that these arches were originally 15 feet tall. The archways were part of a gateway that connected the Citadel to the city. There seems to have been a well near the church. The place name appears in Town Rentals into the 17th Century. According to reports the well was nearly 30 feet deep and was used until the early 1800’s. It was located in the triangular space in the Junction between Patrick and Stephen Streets.

In 1996, part of a plain unpierced stone cross was found in the graveyard.  The origin of the cross is unknown, some believe it might be related to St. Patrick’s Well and date it to the 17th or 18th Century. Others believe it could be older, it’s similar to a cross found in Thomastown, Co. Kilkenny which dates to the 13th Century and may have been used to mark a church’s foundation.

The baptismal font is from 1723 and was previously located near the altar before being moved to its present location in the porch. The font has an inscription in Latin which reads “Anno Domino 1723 Hoc Est Lavacrum Mentium, Hoc Est Sepulchrum Criminum” ­­— “AD 1723, This is the cleansing of the mind, This is the grave of crime.” 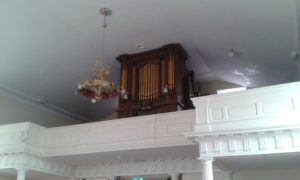 The organ which stands in the gallery above the main hall was installed during a special service 25th November 1880. Not much is known about the church’s organ prior to its installation. 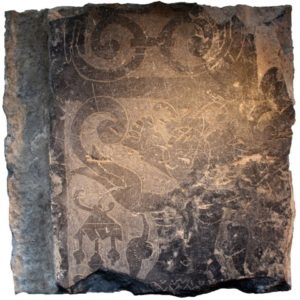 During excavation works, a carving of a bifurcated tailed mermaid was discovered and is believed to date from the early 1600’s. Mermaids were used as a warning to Christians about the sins of lust and vanity. It is the only such mermaid carving found in Waterford and is only one of about eleven in Ireland. 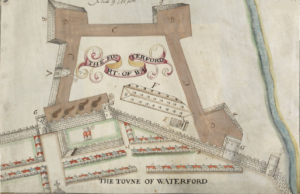 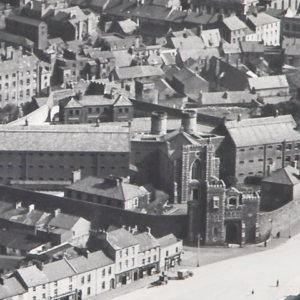 In 1727, a new Gaol (Jail) was built on the site of the Citadel and was later rebuilt between 1861 and 1864. The Gaol was in use until 1939, when it was used during World War 2 by the Local Defence Force. On March 4th 1943 part of the wall collapsed killing nine and injuring seventeen people. A memorial to the victims was unveiled in 2006 on Ballybricken Green. The Gaol was demolished in 1949.

Given its long history, the church has a number of famous people associated with it including:

Compiled by: Leonard Kearon MSc with assistance from Tommy Deegan and Dermot Power; local historians.
In association with TÚS. Funded by Waterford Council